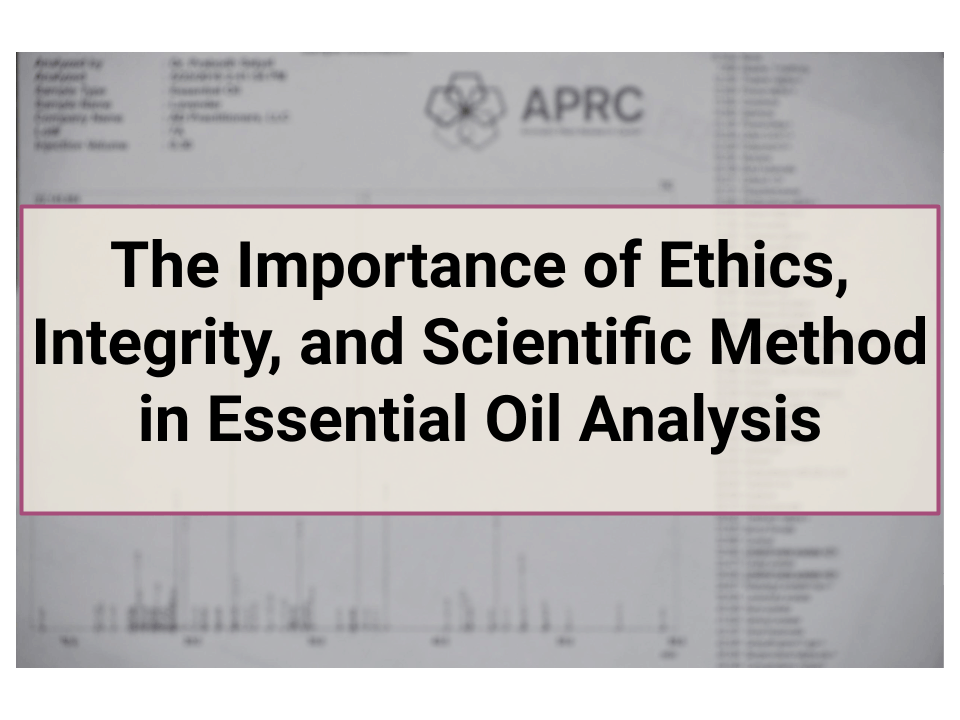 There are several different reasons to perform an essential oil analysis, one of which is to look for adulteration.  Adulteration can come in many different forms that, for the most part, have been discussed in depth by research papers over the years.1  Yet, due to unethical practices surrounding price, and because the demand for some oils is greater than the supply, there are those that are always looking for new ways in which to adulterate them.  That leaves chemists who specialize in essential oil analysis, constantly looking for ways to identify these adulterations.

There are only a handful of labs in the world that are qualified to find essential oil adulterations. One of the ways they do so is through the use of gas-chromatography and mass spectrometry (GC/MS).  With this they are able to identify many of these adulterations, some of which are revealed because of the presence of certain trace markers.  However, they must be able to provide proper evidence, showing without a shadow of a doubt, that these markers are truly the result of adulteration.

On June 18th, 2019, an article was published by ConsumersAdvocate.org reviewing some brands of essential oils by different criteria including GC/MS testing.2  It was shared on social media by Aromatic Plant Research Center (APRC), the lab who tested the samples of the different oils used in the Consumers Advocate article.  In the article it was stated that some of the companies listed had oils which had failed the GC/MS testing performed by APRC.

While there were many different GC/MS reports, and other trace markers mentioned for other adulterants, concentration was placed on the reports for Lavender essential oil that specified, “Synthetic markers of Linalyl acetate were detected.”  The focus of this paper was placed there because Lavender adulteration with synthetic linalyl acetate was one that this author already knew a little bit about, and what was being stated was not tracking with what is known within the scientific community.

When it comes to essential oils used in aromatherapy, it is important to note that there are only certain oils that are redistilled, and that is for very specific reasons.  For example, if you ever get the chance, compare samples of unrectified and rectified Clove, Eucalyptus, and Peppermint essential oils.  Have you ever noticed that many Peppermint essential oils smell sweet like peppermint candy rather than having the more herby smell you get when you crush the leaves of the plant between your fingers?  That is because that oil itself has been redistilled.  Also, Eucalyptus globulus essential oil is often rectified to remove certain aldehydes that can cause irritation and coughing in users.12  In turn, the process also increases the level of 1,8 cineole.  Without that being done, we would not get the oil that many people are accustomed to, nor may we get the desired results.

Questions and Lack of Proper Evidence

The attempt was made by several people in Facebook posts to get Prabodh Satyal to answer basic questions to gain a better understanding of APRC’s process determining that the Lavender oils in question were adulterated.  However, the questions either went unanswered, the response was vague, or he gave a response that did not answer the questions asked.4,13

Also, proper evidence was definitely not provided that would justify all the repercussions that come along with making the claims that the oils were adulterated.

As far as the paper on the antique Lavender oil that was referenced, it was understood that Satyal was inferring that since it did not show that those two chemical constituents were present, that it was definitive evidence that they do not occur naturally.

That is still not proper evidence.

Given what is known about analysis per PhytoChemia’s article (titled 100% identification?) referenced below, and Satyal’s own words in one of the videos, how can we be sure that they truly were not there without having access to the full analysis to look for them specifically?  The point of that particular paper was not to prove or disprove the existence of those chemicals in Lavender essential oil, so there is just not enough information there to conclude that.  Also, the above mentioned article and video explain why the linalool oxide acetate cis and trans may not have been listed in that paper, or on other GC/MS reports performed by others.6,19

Not to mention that there are many reasons (including a plant’s growing conditions, when it is harvested, etc.) that can and do cause chemical variations in the resulting essential oil.

When it comes to Lavender essential oil being adulterated with the use of synthetic linalyl acetate, there are currently only two synthetic markers that have been recognized by proper evidence to be reliable.  There is dihydrolinalyl acetate that has been well-known for years as the trace marker for linalyl acetate derived from petrochemicals, and plinyl acetate which is derived from natural alpha-pinene.1,20

As far as the scientific community is concerned, without solid evidence that something is factual, lack of said evidence IS evidence to the contrary.  If there is no evidence, it is not fact, only hypothesis.21  However, if there is proper evidence, it needs to be published in a peer reviewed paper showing that it is replicable and can hold up to scrutiny.  Once accepted, it should then be shared with enthusiasm as a new discovery to benefit the community as a whole.

As it stands, there are only two chemical constituents that have been recognized by proper evidence to be reliable synthetic markers for linalyl acetate, and they are dihydrolinalyl acetate and plinyl acetate.

The constituents linalool oxide acetate cis and linalool oxide acetate trans identified as sythetic markers by APRC, are not recognized as trace markers for adulteration in the industry.  The reasons for this are explained in the PhytoChemia document below as they are shown in other papers to be naturally occurring.  Furthermore, they, or any others for that matter, should not be used by anyone to determine essential oil purity without proper evidence showing, beyond a shadow of a doubt, that they are correct.

APRC has been actively using findings, some of which are nothing more than hypotheses, in their analysis of essential oils.  This has led to oils being deemed as adulterated that should not have been.  This leaves one to wonder… How reliable are any of the analyses that have been performed by them?